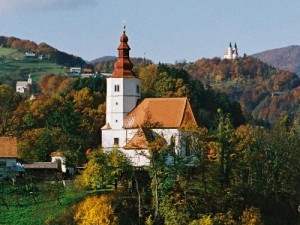 Right on the hillock above the Lahomnica stream outfall into the Savinja river, the church of St Mati Božja has been dwelling for ages for people to enter and to admire its interior embellished by gothic and renaissance motives of no comparison on the Slovene territory. Until the 18th century, a passional procession used to wind from the town of Laško towards the church to pass twelve stations on its way. The latest scenes took part at the chapels stairs aside leading to the church itself, however the scene of the crucifixion was performed right in front of the church door. The passion is believed to be the first performance of the theatre play in Laško ever. Not far away from the church, there is a manor called Hof zu Graz in those times, which is supposed to be there even before the construction of the church, and the rocky hillock was the standing-point of a smaller fort. It was not just the case for the manor to be owned by various proprietors starting from the monastery of Jurklošter, to continue with the Counts of Celje, Ivan Meusenreiter, the chancellor of the Dukes of Celje, and the Mosconi barons just to mention some of them. An old mill was situated at the Lahomnica stream not far from the manor grinding grains in the Middle Ages already. After Second World War, the mill named after the actual proprietor the Turk’s family burned to its roots. The manor now restored is housing the Čater guesthouse.