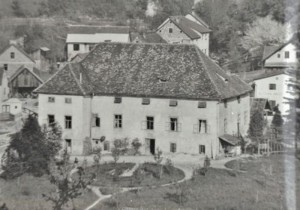 Notably, during the years 1843 and 1846 it served as a hospital for workers, which were building a railroad close by in the times of Maria Theresia. The first doctor in Laško, namely Urban Žnideršic, was employed in this hospital.

In the year 1846 the mansion was owned by a manufacturer of cement, who had a cement factory on the right shoulder of the river Lahomnica, under the brand of Roman. The cement was used in underwater construction. Upstream the same man owned a cement factory under the brand Portland. Interestingly, this cement was packaged into 200kg wooden crates. Because of these factories, a railroad was built in the Lahomnica valley. The factories had 4 furnaces and employed about 40 people. In the year 1928 the factories closed down due to increasing competition and the scarcity of raw materials.

The last pre-War owner was the attorney dr. Ivan Jacobi. After World War 2 the brothers Kopač bought the mansion. Here they had wood workshops and produced mostly furniture and toys. Their heirs sold the mansion to the Čater family, which adapted the mansion and repurposed it into a guesthouse.

As an interesting fact it is worth mentioning that the mansion is connected with the church of St. Mary of Mount Carmel with an underground tunnel. Oral tradition states that a road went through the mansion in medieval times and the building served as a checkpoint for the collection of taxes.