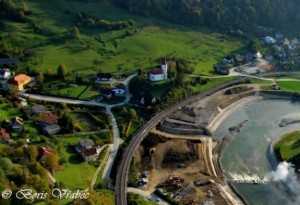 Marija Gradec is a settlement that lies south of Laško, on the left shoulder of the river Savinja. According to old writings, this area was already settled in the time of the Romans, who had a castellum on the nearby hill to watch over the roman road. The road lead on to the Lisca pass and then further on into Panonia. In the 13th Century the Routenberg nobles build a castle on the hill, but the family died out in the year 1375 and the castle fell into ruin. The nobility of Celje built a new mansion under the hill, which was first mentioned in the year 1444. In the years from 1503 up to 1506 a gothic church devoted to Maria was built on another nearby hill, which also served as a defensive position if the town came under attack.

The town got the name after the church of St. Mary of Mount Carmel, which stands on a nearby hill, and the mansion Gradec, in which the Guesthouse Čater is situated today.